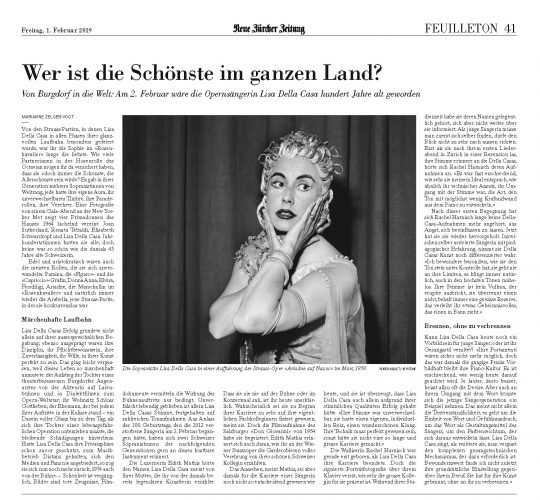 The Valaisian Rachel Harnisch was just born when Lisa Della Casa ended her career. But the signed portrait photography above her piano reveals how much the great colleague is present for her. While she was a student, she occasionally heard her name but did not keep track of her. As a young singer you have to find yourself first, do not look too far outside. Only when she read in a review after her first recital in Zurich, her voice reminded of the Della Casas, listened to Rachel Harnisch their recordings. "It was almost frightening how much she lived up to my ideal, how similar her technical approach, her handling of the voice was, the way to develop the sound from the piano with as little effort as possible."

After this first encounter, Rachel Harnisch has not listened to Della Casa recordings for fear of being influenced. Now she's got her out again. Meanwhile established singer with pedagogical experience, she perceives Della Casas art even more differentiated. "I especially admire her control over the sound, she never goes to her limits, it always sounds natural, even in the highest notes effortlessly. Her voice is not a volcano erupting eruptively, she does not overrun one, always keeps a certain reserve, which gives her something mysterious, that captivates you. "

Can Lisa Della Casa still be a role model for young singers today, or is her vocal style outdated? "Their portamenti would certainly not be possible, but that was the common practice. Her piano culture remains exemplary. It is frightening how little attention is paid to it today. The louder, the better, is often the motto. But also in their handling of the word, the current generation of singers could take an example. This does not just mean the comprehensibility of the text, it is about the unity of word and emotional expression, about the word as a means of design of the singer, about the richness of color that can be developed from it. Lisa Della Casa sings as if reciting, forgetting the complex vocal mechanism required to do so. Last but not least, I find her basic attitude towards her job admirable. She burned for her art without burning on her. "